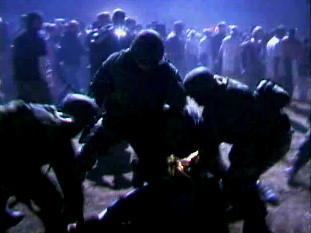 [...]
Several partygoers felt they should have the right to attend a rave where drugs are being used, so long as they don't personally use them. "While it may be true that some individuals choose to take drugs at said events like this, myself as well as many others choose to go for the music. Just like anything, you have bad apples, but you shouldn't cut down the tree," said one attendee. "Raves are not the only musical gatherings where drugs are used and distributed," said another.

Other partygoers felt that the use of force in the shutdown was excessive - numerous eyewitness accounts by concertgoers describe people being beaten, tasered, or attacked with dogs. One account from an attendee, identified as "Colby", states: "I saw at least two people being beaten on the ground while barking, snarling dogs are held just a few feet from them. Weapons were being pointed at unarmed, peaceful civilians. A friend of mine was forced at gunpoint to put his hands on his head and turn around, because he asked if he could get his things from the tent."
[...]

[...]
From several previous experiences with Rave parties of this size, a large amount of drug use and underage consumption of alcohol occur. In addition reports of sexual assaults, overdoses, firearm violations, vehicle burglaries, and numerous individuals drive from the party under the influence of alcohol and or drugs.

Utah County Sheriff's Office Detectives interviewed several females that had attended a prior rave party in the Utah county area in the past month that had been sexual assaulted. These females stated that the combination of drugs and alcohol made them fear for their safety due to the groping and sexual assaults that occurred during the Rave party. In the last year alone one near fatal shooting was investigated by Utah County Sheriff's Office at a similar party.
[...]
It was verified that more than 250 individuals were at the party, in violation or county statutes and by 11:30 pm law enforcement personnel moved in to curtail and disburse the party. During this process at least 60 arrests were made for weapons offenses, DUI, illegal underage consumption of alcohol, possession of marijuana, possession of cocaine, possession of methamphetamine, possession of ecstasy, distribution of ecstasy, resisting arrest, assault on a police officer, and disorderly conduct.

A safety sweep was conducted after the crowd was ordered to disburse and numerous narcotic items were located scattered on the ground which included: cocaine, ecstasy, marijuana, mushrooms, alcohol and large amounts of drug paraphernalia.

A 17 year old female from West Jordan, found by officers, had overdosed on ecstasy. She was treated and released to her parents.
[...]
Parents need to be aware of the type of illegal activities that occurs at these type of gathering. Sexual assaults, rapes, overdoses, drugs, alcohol abuse, thefts, and firearms violations. The sale of drugs at these parties is so prevalent that at this particular Rave party drugs were offered to a local off duty emergency medical service personnel who were contracted to be there. In addition two security personnel hired by the promoter were arrested for possession of cocaine and ecstasy