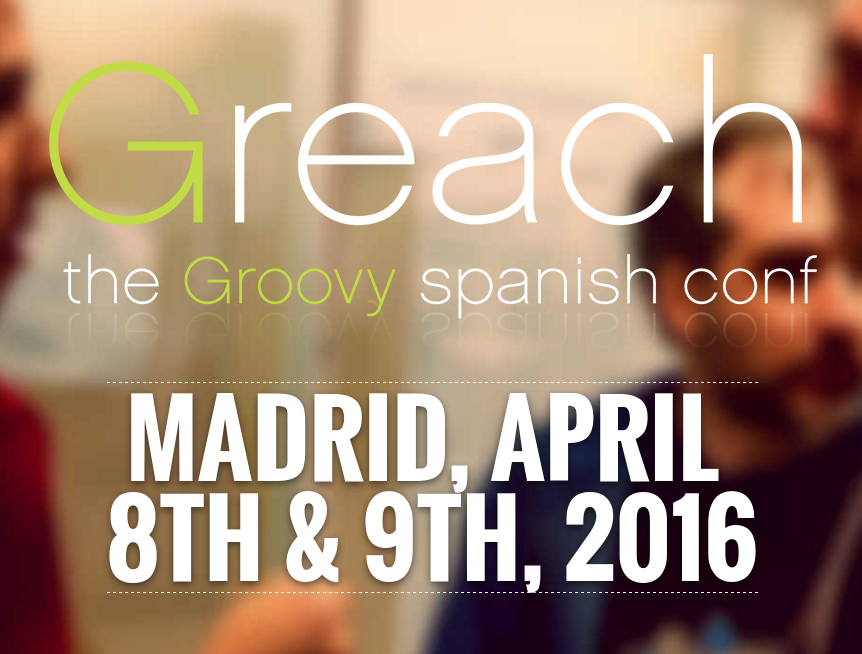 I'll keep my intent to summarize all the important events that I'm attending, and I'll do it again in English as the audience is international. Please, point me any mistake you may find

This last weekend I had the opportunity to attend Greach 2016. Greach is an international conference about the Groovy language and ecosystem, it's hosted here in Madrid but the conference is 100% in English to successfully attract top speakers and attendees. This was the 5th edition of the conference, consolidated as one of the biggest events worldwide about Groovy.

TLDR; You shouldn't miss this gathering if you have a minimum interest in this technology. Top speakers and high quality content are guaranteed in a confortable and thought provoking environment. Totally worth it.

Everything was (as expected) brilliantly organized thanks to Iván López (@ilopar), Alberto Vilches (@albertovilches) and a lot of Sponsors. The venue changed from previous years, and Teatros Luchana was also a success. Both auditoriums and networking space had the proper dimensions, very good location, a very handy cafeteria, free wardrobe, more than decent food,... Maybe the sponsors area could have been larger, but everything else was more than correct.


My presentation from @greachconf
« a Groovy journey in Open Source » https://t.co/gqibxBLdak

@greachconf was a great success, I can't believe it took me this long to attend. Thanks @ilopmar @albertovilches !

#greach you can check the slides of my talk "Down The RabbitMQ Hole" here https://t.co/7UVnOP5tjY I hope you enjoyed it :)