This is the second part of my chronicle about our trip through the Romantikstraße, you can read the rest here:

For me, Kremsmünster Abbey was the most positive surprise of the entire trip. A priori it looked like yet another abbey, and our first hour there not only was confirming that suspicion but also made us feel somewhat deceived. We paid a considerable amount of money to find out that the ticket didn’t include the visit of what we particularly wanted to see in there: The Tassilo Chalice, the Library and the Mathematical Tower. We could only access the public areas and the inner gardens where they temporally hosted a floral exhibition. The information was confusing, mostly in German only, and the variety of ticket options was the most complex that I’ve ever seen in a place like this. 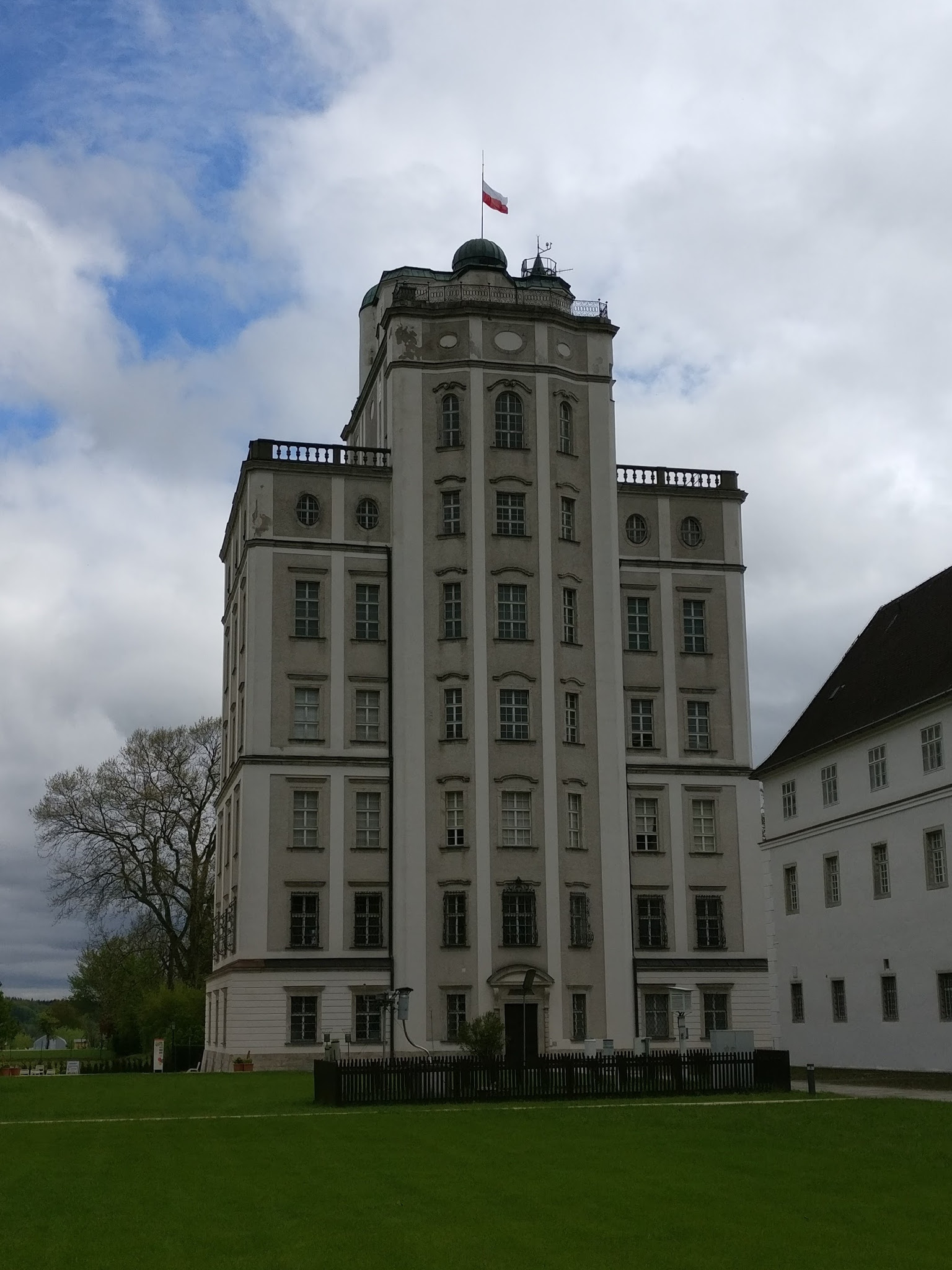 After visiting the gardens and the Abbey Church we followed some unclear signs to the Tassilo, and when we were almost there a couple of exhibition guides insisted us that our tickets didn’t include this area, so they charged us again (without any kind of ticket) to enter the Treasure Chamber and a couple more rooms with minor interest. The Tassilo is an interesting piece of art and history, but the extra price to see it seemed disproportionate.

We were about to leave, almost angry, but in the end we bought another additional ticket to visit the panorama terrace on top of the Mathematical Tower even though it only included climbing up the stairs and going out on the terrace to see the views from there. The rest of the building was not included in our handful of tickets but at least we’d see some of what we initially wanted.

And there, waiting at the entrance of the tower, our luck changed with the stellar appearance of Anna. I’ll call her Anna as the most popular female name in Austria to preserve her identity, not because I don’t remember her real name.

The incredible kindness of Anna, her desire to practice spoken English and the fact that there were no more tourists in the visit, made our day radically better. Waiting to see if anyone else was joining the visit we told her about our bad luck and poor understanding of the information for tourists, and she empathized and wanted to compensate us in some way. She couldn’t realize that we’d bought like three different tickets to leave without seeing what we expected to see (the main attractions, by the way). 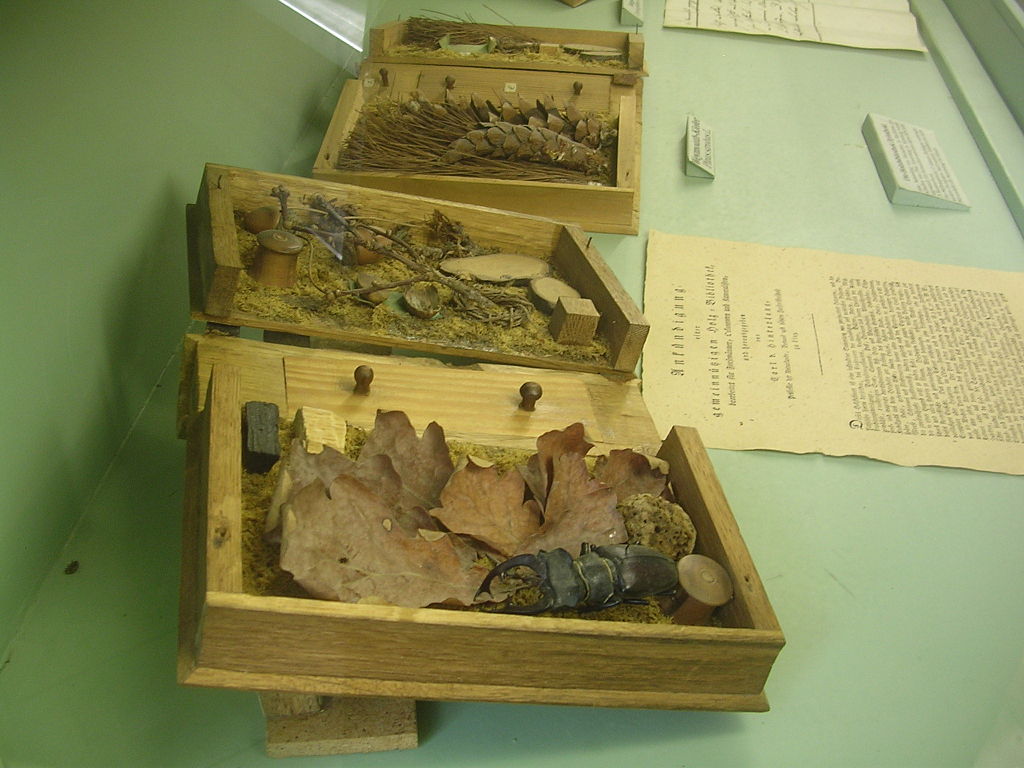 We climbed the Tower, but instead of going directly to the top we stopped at each floor and briefly visited the exhibition rooms. One room was a small Natural History collection with several stuffed animals, minerals, all kind of insects, other contained an interesting collection of vintage astronomical devices and globes, another presented diverse regional folklore, ethnology and popular costumes,… We didn’t make any picture acknowledging that the visit was unofficial, but I can still remember an amazing cabinet with a curious Xylotheque, pieces of different types of wood carved as books that contained their characteristic leaf, fruit or flower. I’d found a picture in Wikimedia, take a look right here.

Anna’s infinite friendliness did not end there. On our way down she offered to negotiate for us a private visit to the Library, guided by herself. She managed to convince her boss, and paying an additional ticket at a reduced price we got to see the rest of the art collections and the impressive Library. We visited the Imperial Hall, several rooms with a nice art collection (mainly paintings) and finally the Library. We could’ve spent hours there… 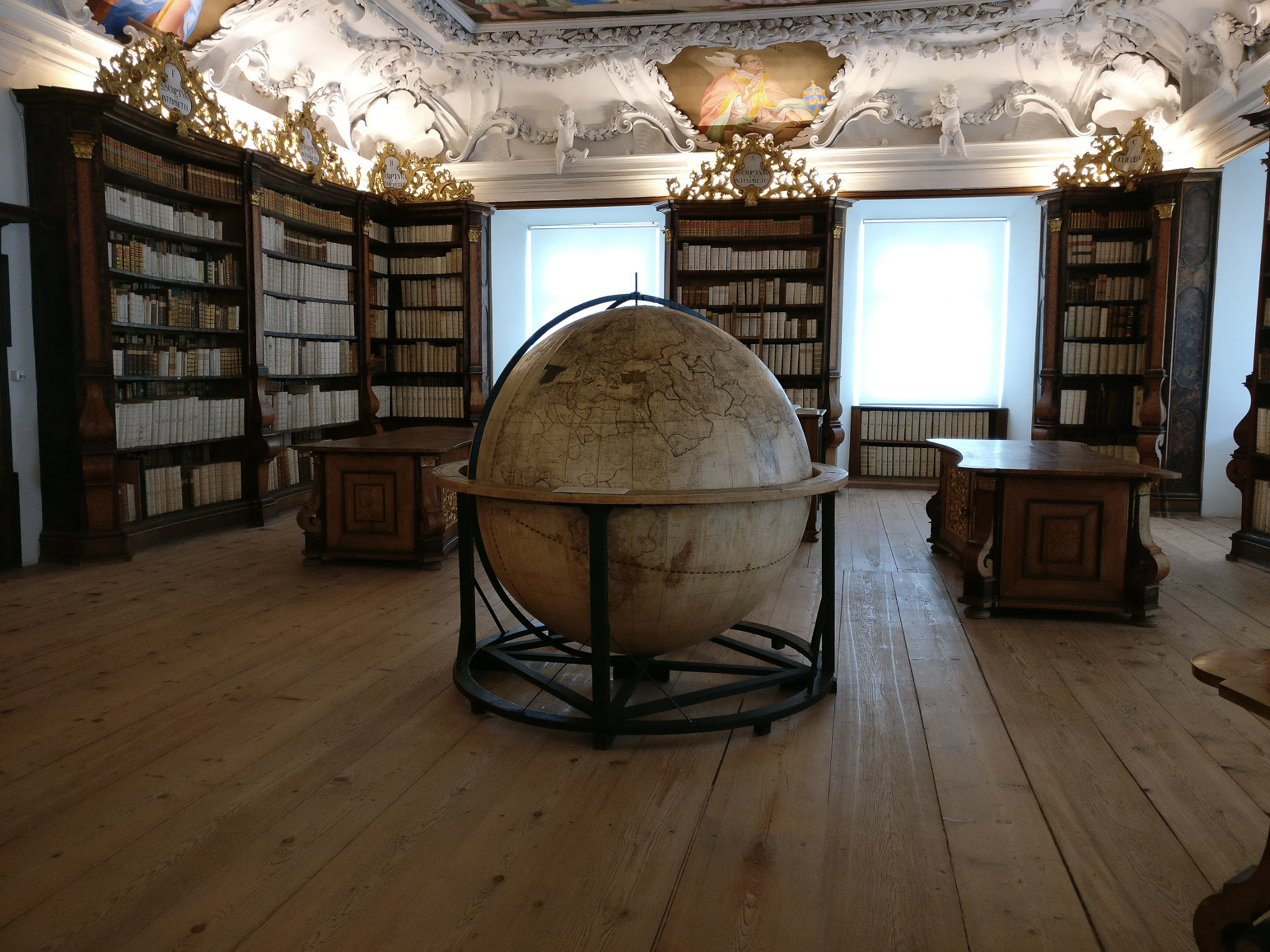 We’d planned to be in Kremsmünster just a couple of hours , but finally we were there all morning so we had to lunch just there, in a traditional restaurant inside the Abbey grounds: Stiftsschank. It was great so we recommend it as well.

Scharnstein stands out for its variety of hiking trails, since it’s surrounded by forests and mountains. It’s also near Totes Gebirge, a picturesque mountain range part of the Limestone Alps.

Our extended visit to the Kremsmünster Abbey forced us to expend less time here, but at least we could do some light hiking. We made one of the typical routes: climbing from the town to the ruins of the Scharnstein Castle. Both the ascent and the exploration of the ruins were fantastic. We were lucky enough to be completely alone, so it was a relaxing experience and a total immersion in the Nature that surrounded us. The views were excellent, with the remains of the castle with the huge Almtal valley behind. 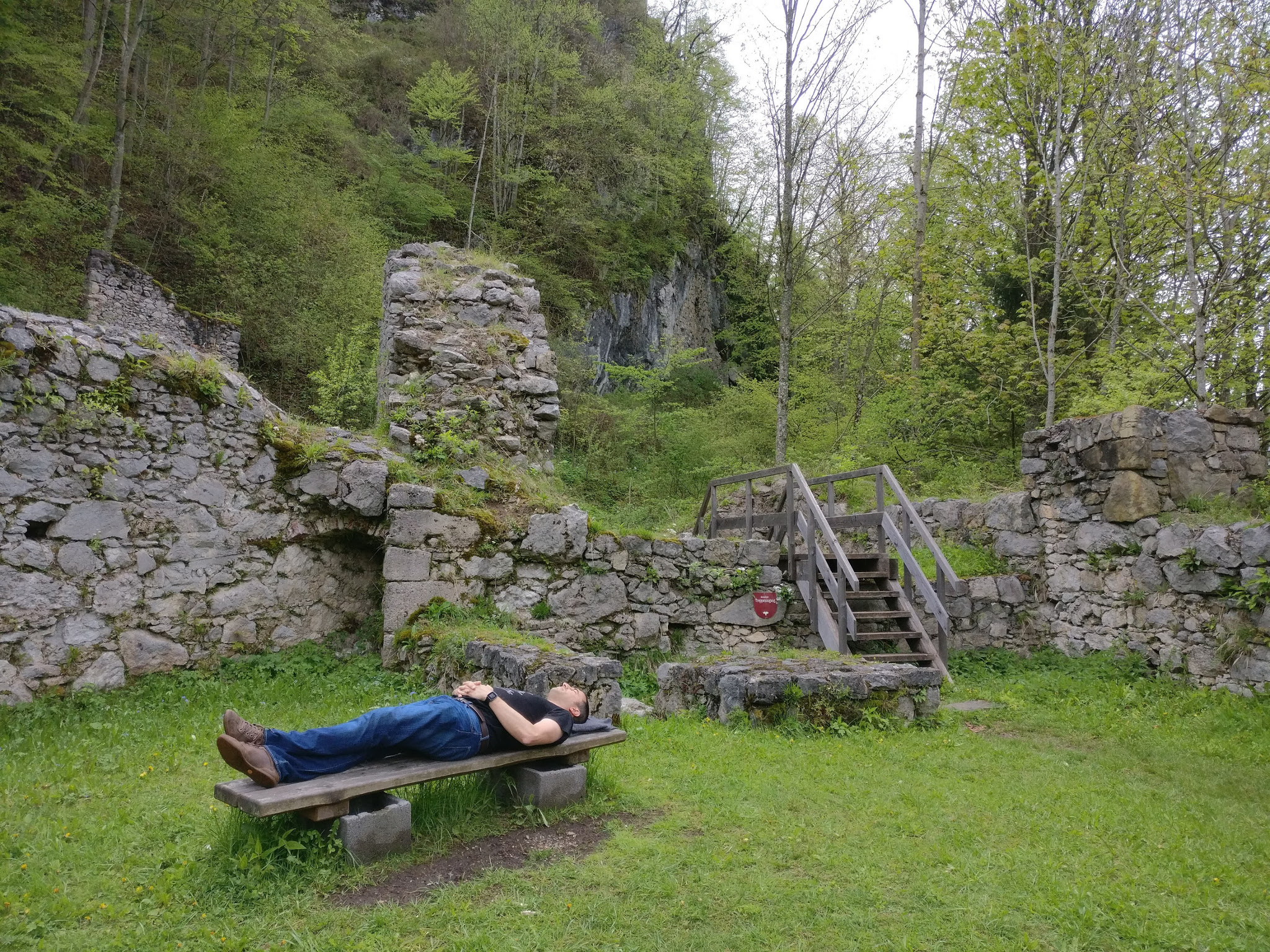 In Scharnstein you can also find an interesting Criminological Museum. We went there but it was closed, so we settled for a beer in a tavern located in the same Scharnstein Castle that hosts the Museum about Crime and another about the Austrian Federal Gendarmerie. The tavern was promising but they’ll have to admit that it has seen better days.

Our next stop was Traunkirchen, a small village known for its idyllic location on a small peninsula overlooking the Traunsee Lake. It’s probably the place where we took more pictures per minute, and that’s considering that the best pictures of the village are made from the lake itself. It was a short walk, but it was totally worth it.

On our way there we booked with our mobile a guest house in other village. If we had seen the Das Traunsee Seehotel before… we’d have spent the night there regardless of how much we were charged, and it didn’t seem cheap. The views and the back terrace of the hotel were incredible. 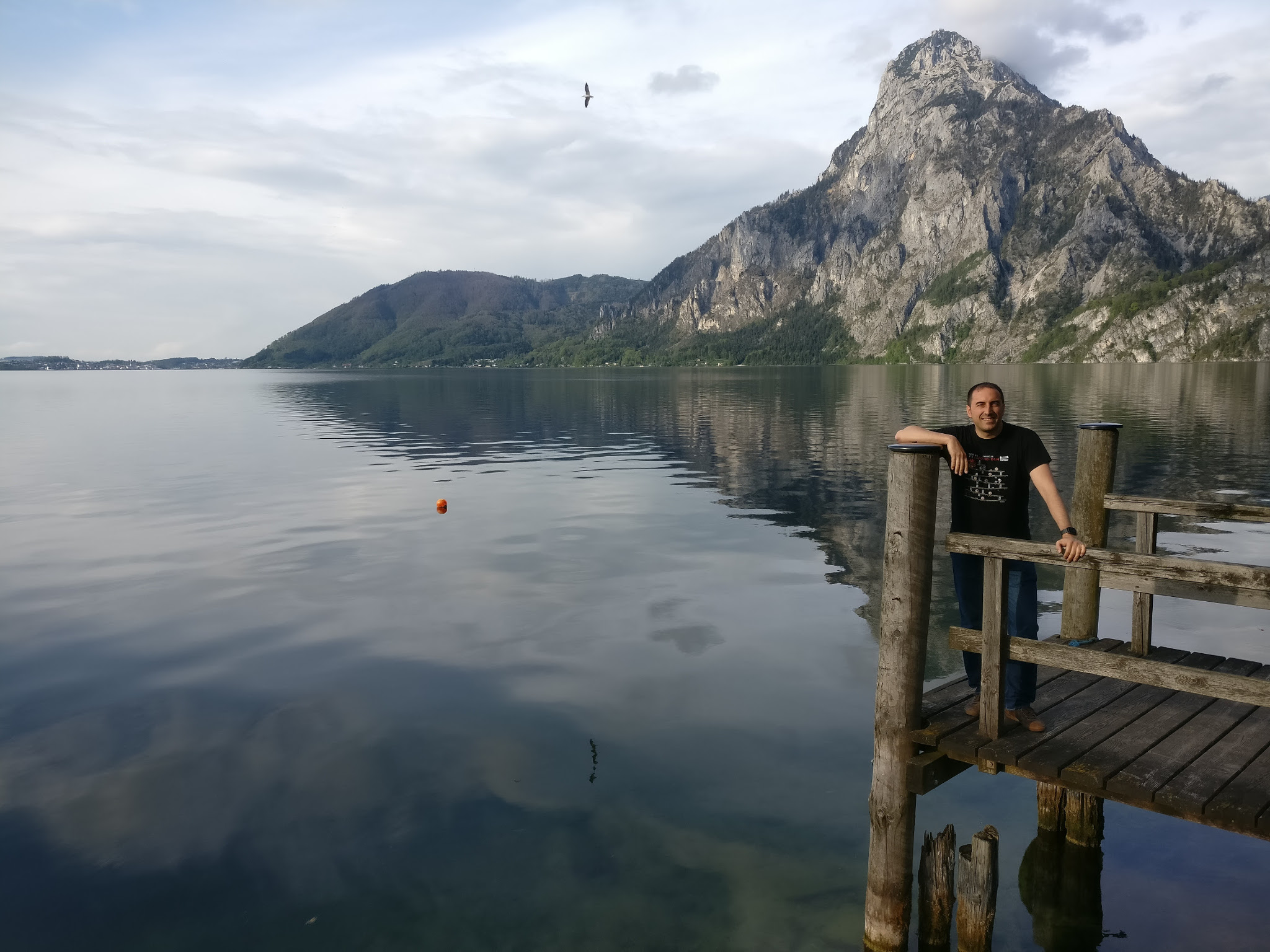 A pier in Traunkirchen with the Traunstein mountain behind

We planned to end our second stage in Gmunden, the most important town of the region and where the Traun River empties into the Traunsee Lake, at the foot of the Traunstein mountain and near the beautiful village of Traunkirchen. Yes, I agree with you, this village should’ve been called Traun Town.

Gmunden is a very lively town with a lot of summer resorts, shops, art galleries and restaurants. Curiously, most of the fashion boutiques exclusively had Austrian regional costumes on display on the storefronts. I left there with a real desire to buy one, they were splendid. During our visit it was very peaceful, but it was clear that it’s a popular tourist destination. The old town is surrounded by countless houses of all sizes from modest chalets to small palaces.

In the western lakeside, in front of the mouth of the Traun River and connected with the downtown through the Esplananade (a nice long promenade) is located the biggest attraction of the town: the Schloss Ort Castle. This singular Austrian Castle is set on a small island offshore, so it can only be reached by a long timber bridge. This 120m bridge starts from a beautiful green peninsula called the Toscana Park. We took a delightful walk through the park by the water’s edge where each stop seemed a special viewpoint and provided a unique perspective. 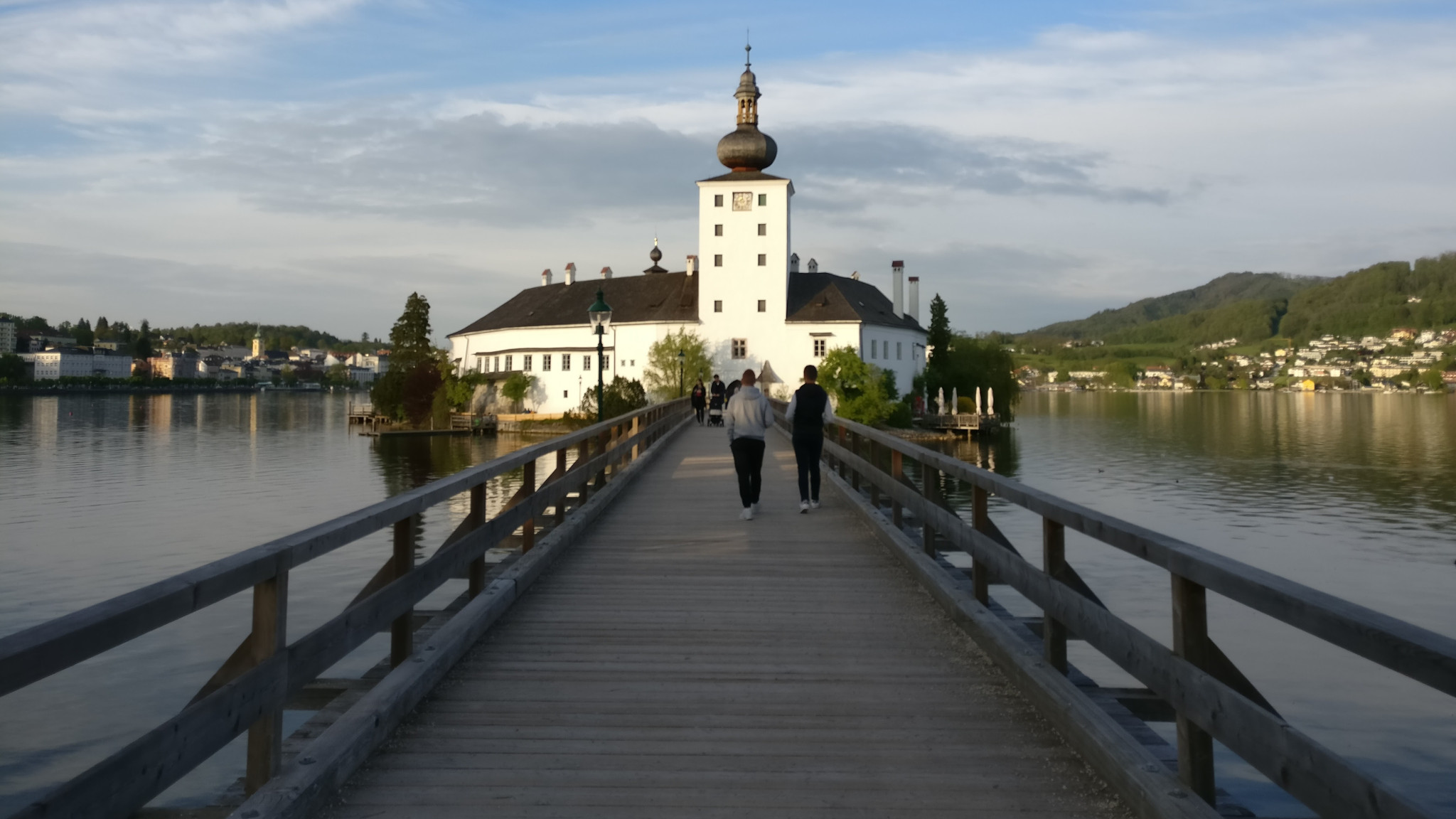 We had dinner at the Weinhaus Spiesberger, conceivably the best tavern in town where Agatha dined, guess what, Traun Fische! We did not quite understand what kind of fish it was, as in the UK when you order Fish & chips and almost nobody is capable of telling you the specific type of fish. Anyway, it was a seasonal fish from the Lake (or so the said) and it was good so I also recommend this place at least for a beer.

Stay tuned for next episodes!