This is the fourth part of my chronicle about our trip through the Romantikstraße, you can read the rest here:

Our fourth stage started in Gästehaus Lauterbacher, a splendid guest house in Neumarkt am Wallersee. Quite off our route because we couldn’t find anything affordable in Mondsee. We wanted a good place to rest after a hard day 3, and Lauterbacher was more than good. The place itself was nice and the owners were marvelous with us. I’ll seriously consider returning to this place if I ever come back to the region.

And thus it began the most awaited stage of the trip.

On our way to Hallstatt we droved through Postalm, a mountain pass which is part of a very well preserved and protected Natural Park. Just to cross the area you need to pay a tax (5€ per adult, 2 per children and so on). Normally you’ll pay to spend the morning, the day or the weekend inside: it’s full of hiking routes, mountain bike tracks and even several ski slopes for the winter.

As it was early in the morning, it was almost empty. We only came across a couple of cars and several herds of cows. The scenery was beautiful: everything was green, mist here and there, and almost no sign of mankind except a few piles of stacked wood and the road itself. 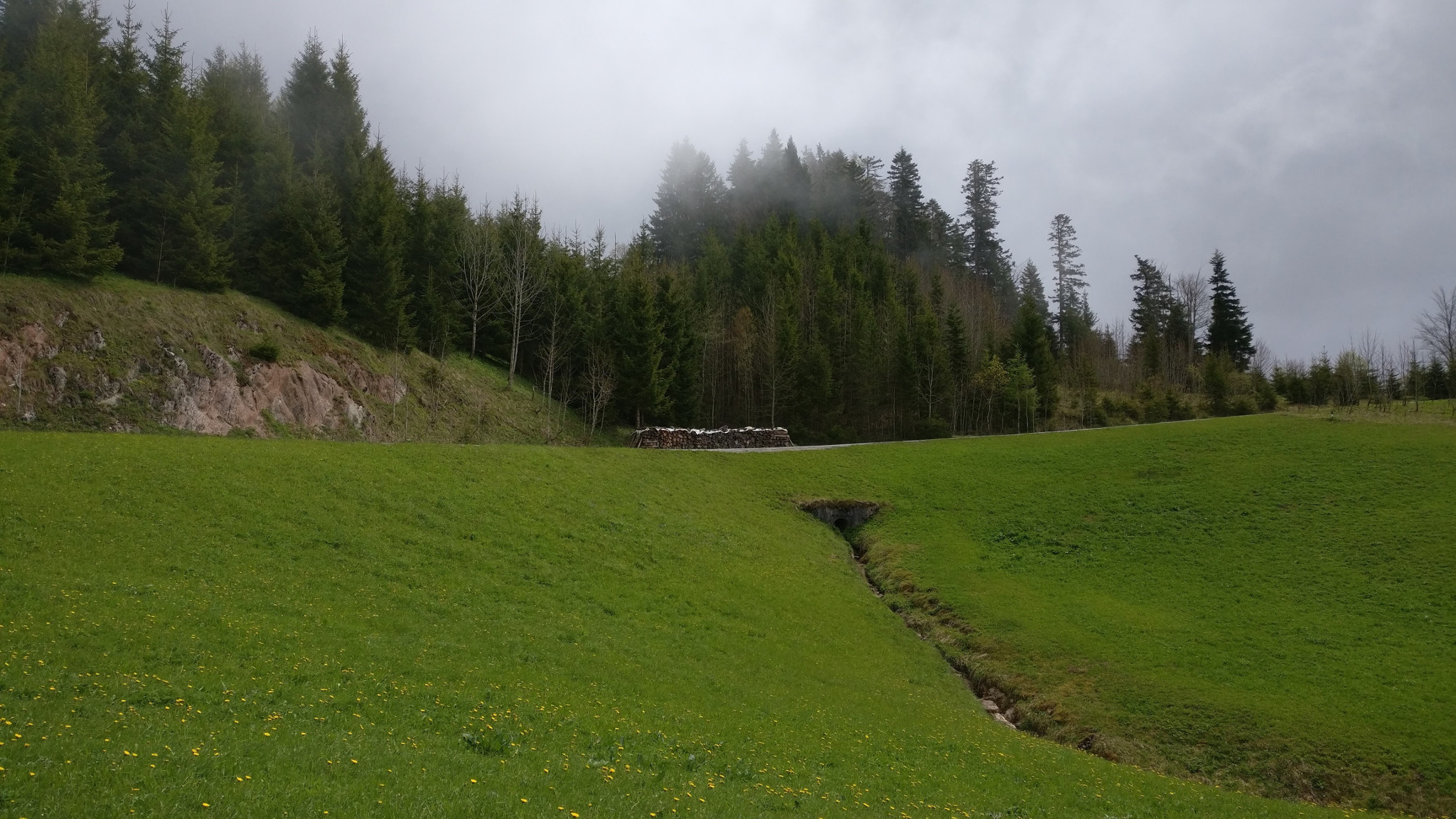 Postalm, paradise of Solitude and Nature

I loved the place, although we only stopped a couple of times to make pictures. Another place that I hope to return in the future with my hiking equipment.

Our next stop was Gosau. We also spent less time than expected here, we were eager to arrive Hallstatt as soon as possible. We crossed the town a couple of times, made some pictures, visited a lake,… great if it was not what we had been doing the past three days. 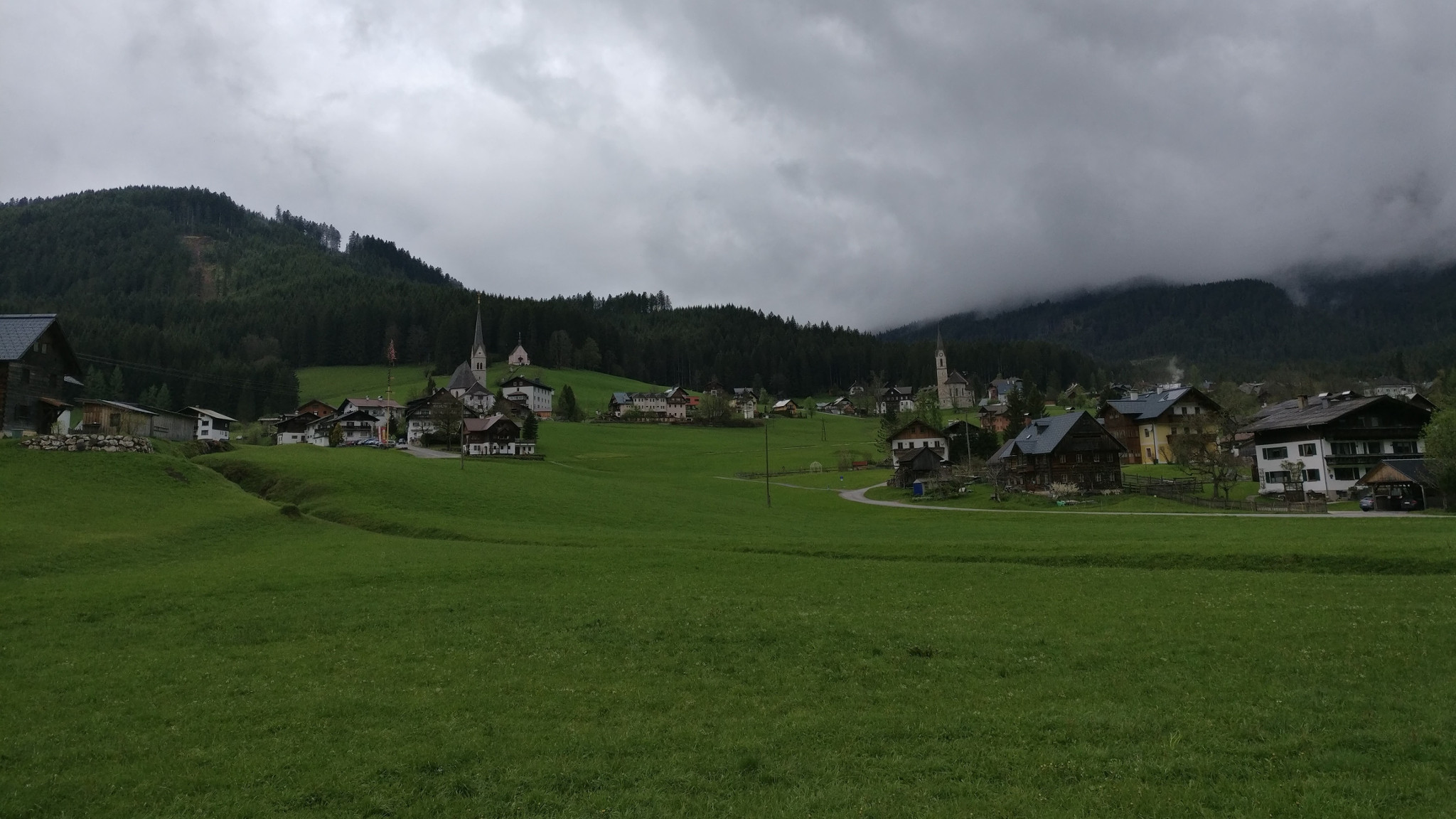 The catholic and evangelist churches, disputing the valley in Gosau

And finally, we arrived Hallstatt, the main destination of the entire trip. I generally liked it and of course it’s very beautiful, but I must say that it might be overrated (IMHO).

The first thing that we did was to go up to the Salz Welten (Salt World) complex using a funicular. The views were as amazing as this during the climb: 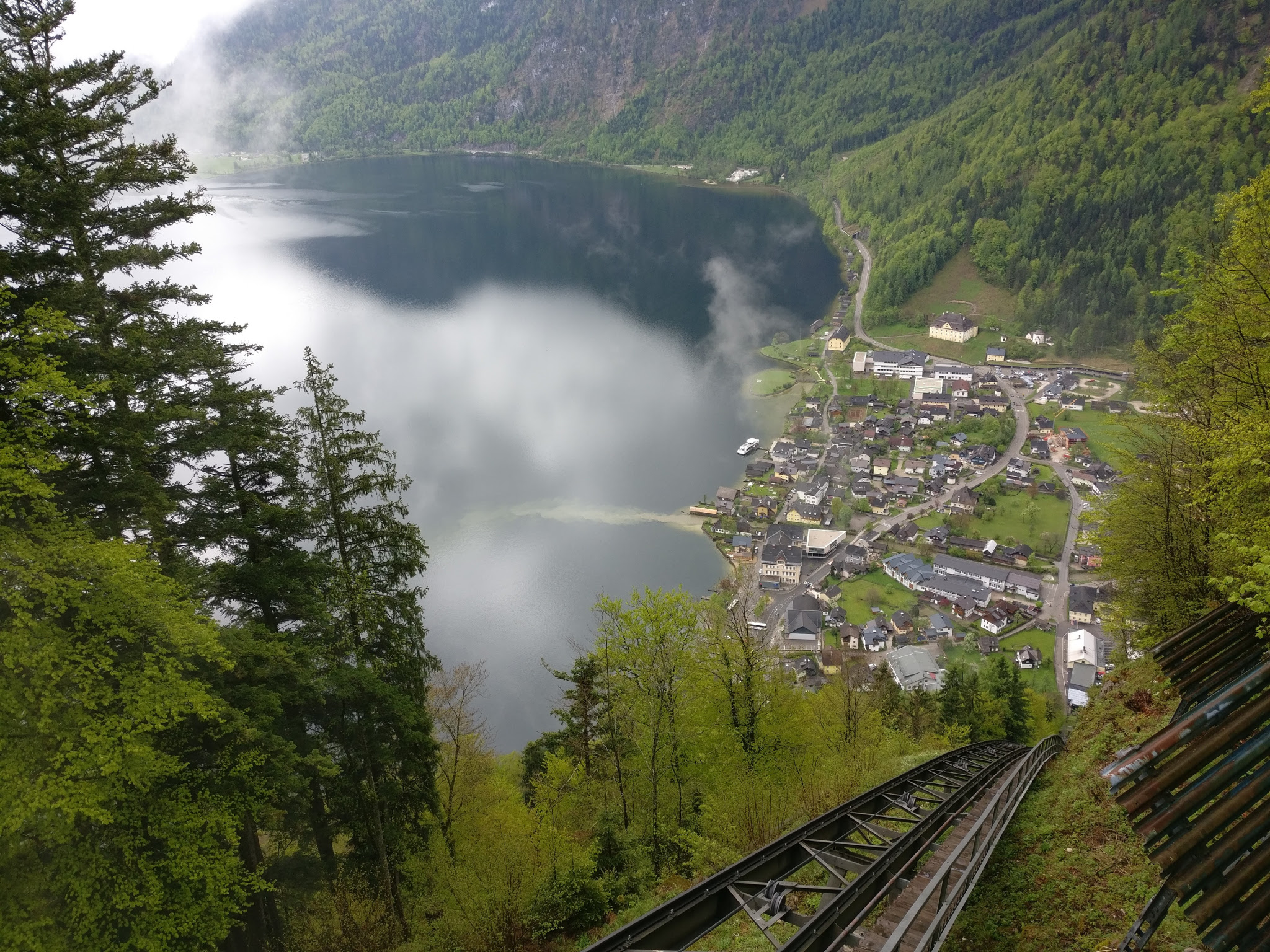 Southern part of Hallstatt, with the Salzbergbahn station

Right after ascending you’ll find what they call the World Heritage View (with the corresponding restaurant and souvenir shop): an impressive viewpoint from which you can see much of the Hallstätter See lake and just below, small (because it is small) the old town of Hallstatt on the lake shore. 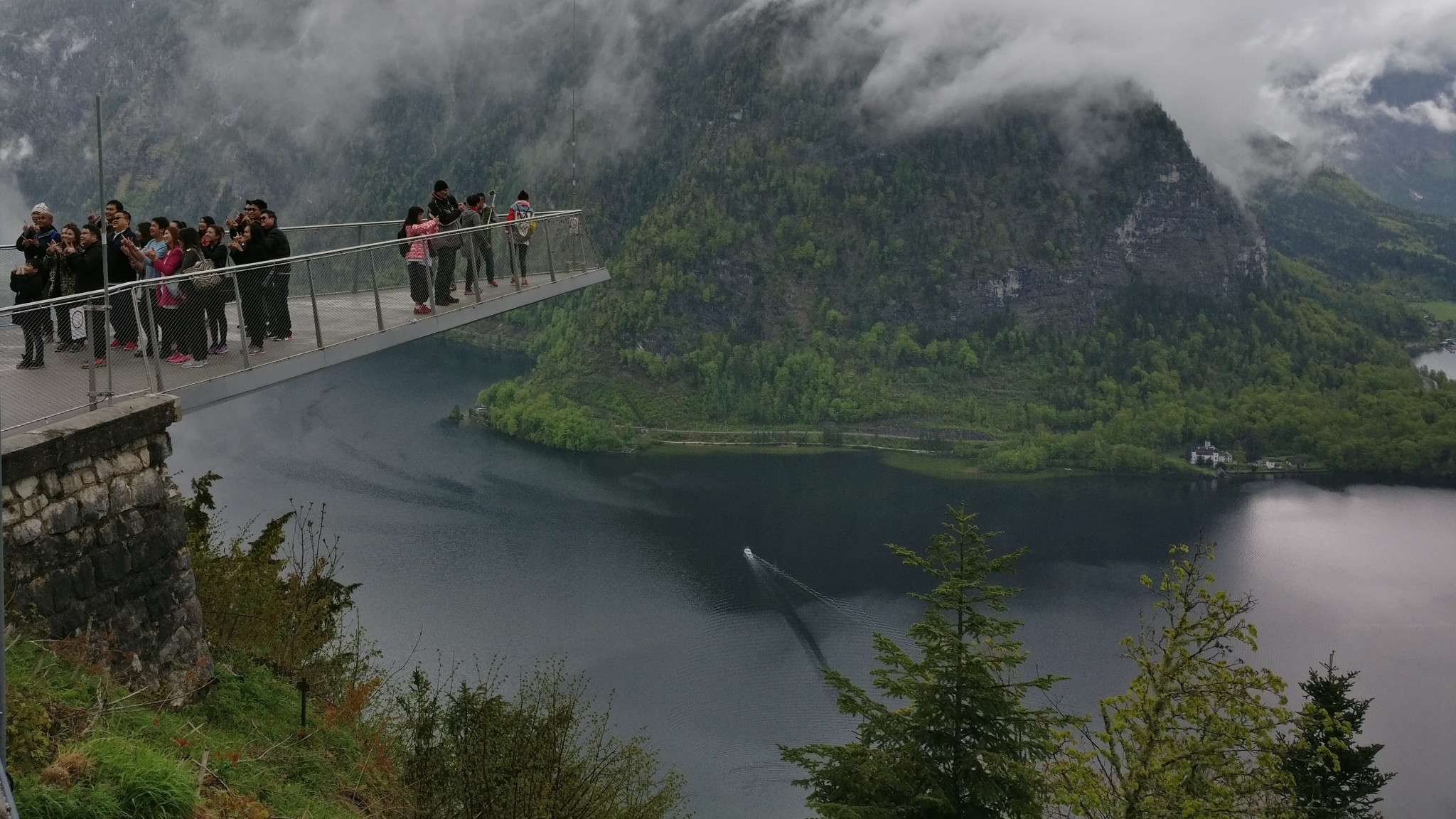 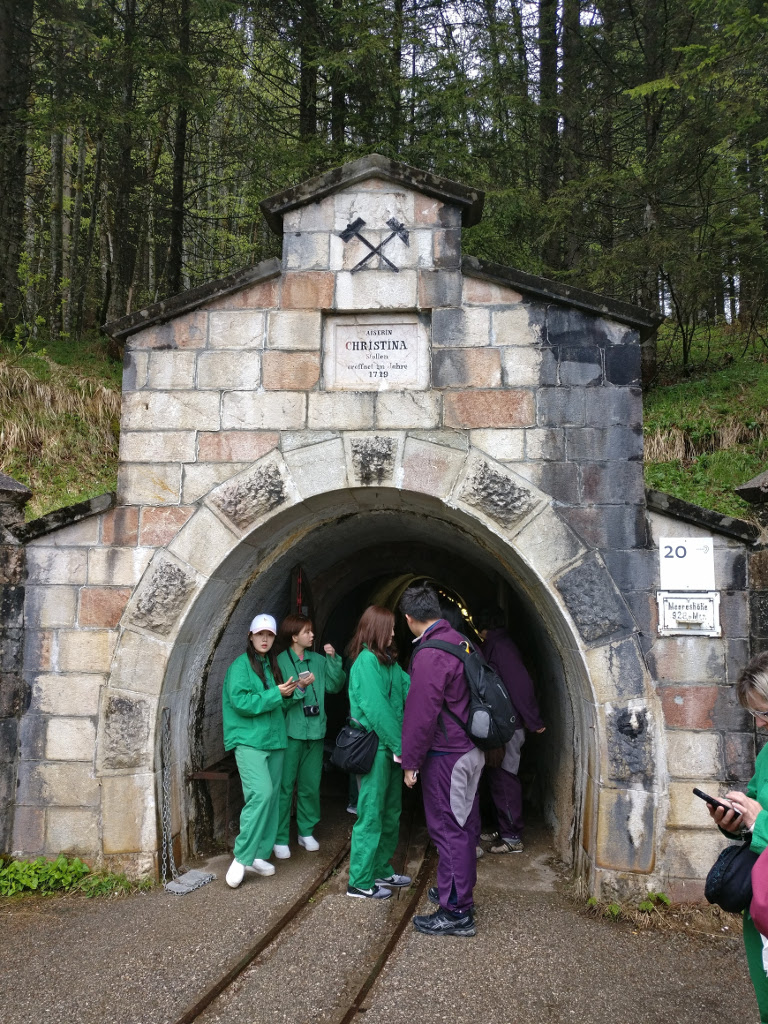 'Miners' sheltering from the rain in the Hallstatt Salt Mine

They claim that the Hallstatt Salt Mine is the oldest salt mine in Europe, but what they have there is more a tourist trap (as we guessed beforehand) than an historical or practical recreation. Yes, during the visit you go underground and they even give you a miner outfit, but the visit consists almost exclusively of videos and light effects.

What makes the visit unique are wooden slides by which you descend from some galleries to others. It’s curious, but after the second one it’s not that thrilling and with a big group visiting the mines it’s bottleneck after bottleneck. These slides are the reason behind the miner outfit, because apart of them the risk of staining or tearing your clothes is null. A curious thing, being a mine.

But maybe I’m biased, after visiting in 2016 the Wieliczka Salt Mine in Poland, near Krakow. Wieliczka is a really huge mine, the areas that are visitable are much more impressive and the information is infinite times more interesting.

Luckily for you as future visitors, the funicular ticket to visit at least the World Heritage View can be purchased separately from the entrance to the mines.

With that bittersweet flavor, we went down again to visit the old town, full of restaurants, hotels and souvenir shops. The best approach to visit Hallstatt is to lose yourself in its streets, alleys and stairs. I liked some hidden corners more than the typical streets or squares. In fact, what could be a very cool area for visitors (next to the church) is used as parking and therefore is full of cars. Cars and vans can be seen on any postcard picture, as this one: 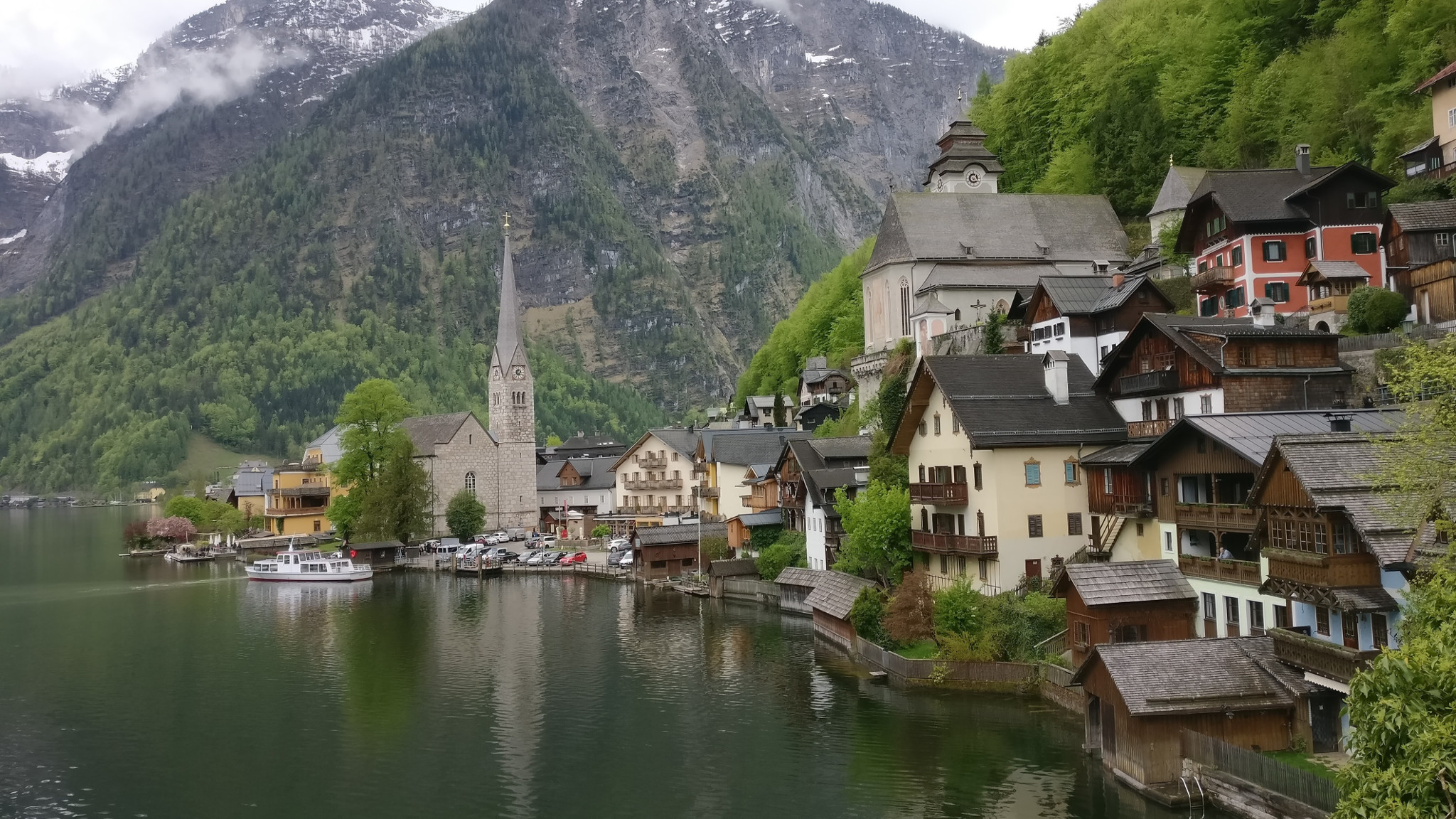 Hallstatt from the 'postcard picture' spot

And I say postcard picture because since you enter the town there are signs for you to go to the spot from which the postcard picture can be made. Looks like the spot it’s important for them, so I added the viewpoint to OpenStreetMap :-)

We took dozens of postcard pictures and postcard selfies, struggling to avoid that other tourists could appear. It was packed full of people.

A very cool thing about Hallstatt is that the cemetery is located between the houses that surround the catholic church. There is so little place to bury people there that every ten years bones used to be exhumed and removed into an ossuary, to make room for new burials. A collection of elaborately decorated skulls with the deceased’s name, profession and date of death inscribed on them is on display in a small chapel. 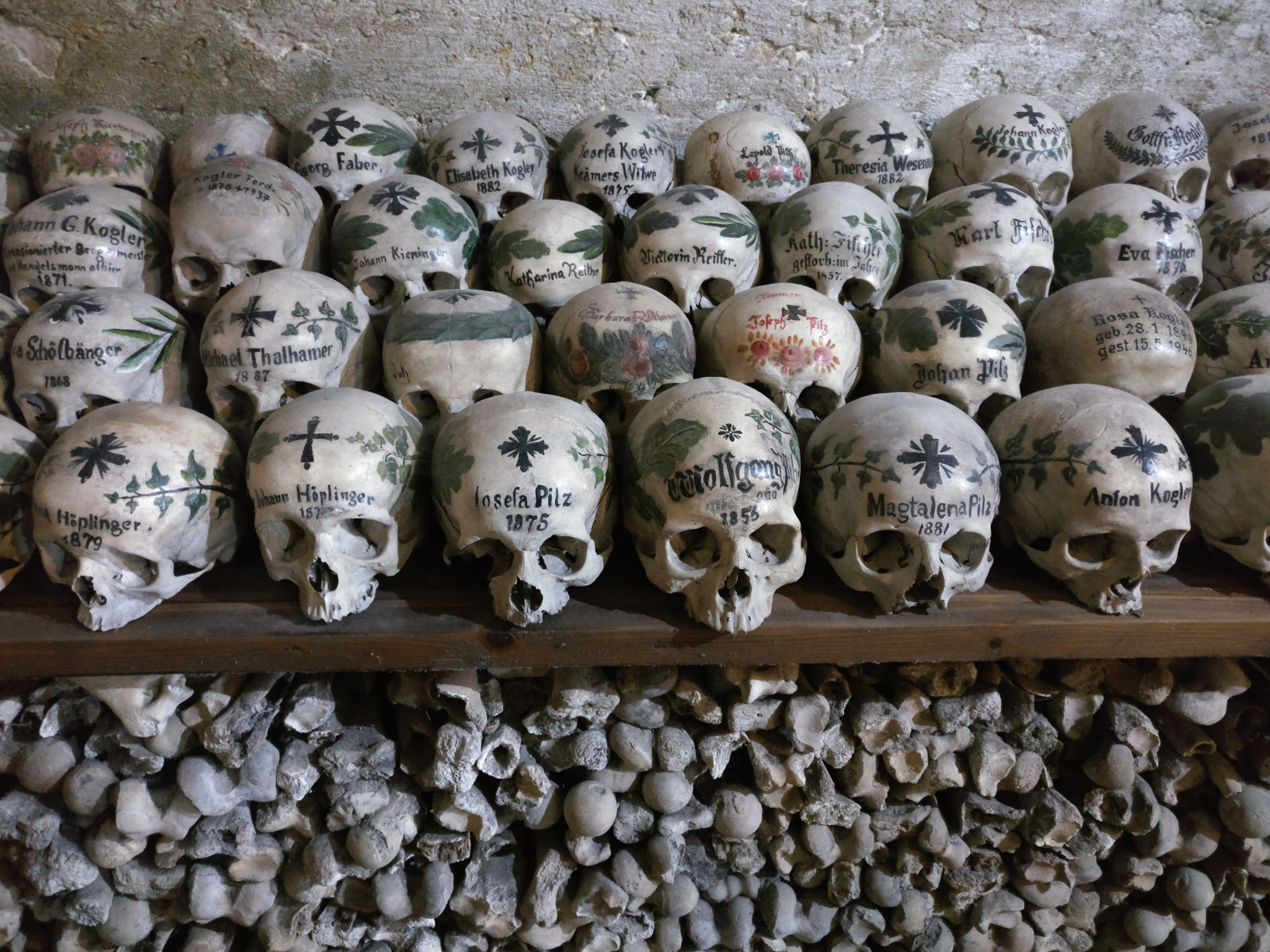 Hallstatt Beinhaus, where you can show off your skull forever

Apparently it’s possible to leave written in your will that you want your skull to end there. Think about it.

We ended the day (and we could also say our Romantikstraße trip) in Obertraun, another touristic place just in front of Hallstatt in the lakeshore. Obertraun also has it’s own funicular with caves, mines and breath-taking views, the Dachstein Salzkammergut, but as it was raining and very foggy we prefered to stay in the lakeshore.

Despite the heavy rain and the mist, we took a couple of glasses of the wine we had bought in Kremsmünster and went for a walk. In the lakeshore there were several floating platforms, ready to receive bathers in the summer. We toured the entire village and we even entered a small forest in the mouth of the Koppentraun river to search for a cache (and it was worth it!).

After starting to worry about not find any open restaurant, we discovered the perfect place (and it was beside our hotel): Kegelbahn, a restaurant with typical local food, and a small bowling alley! After a delicious onion soup, a superb goulash and an exquisite cheesecake, we occupied the bowling alley until they closed the place. It was such a fun and unexpected moment. 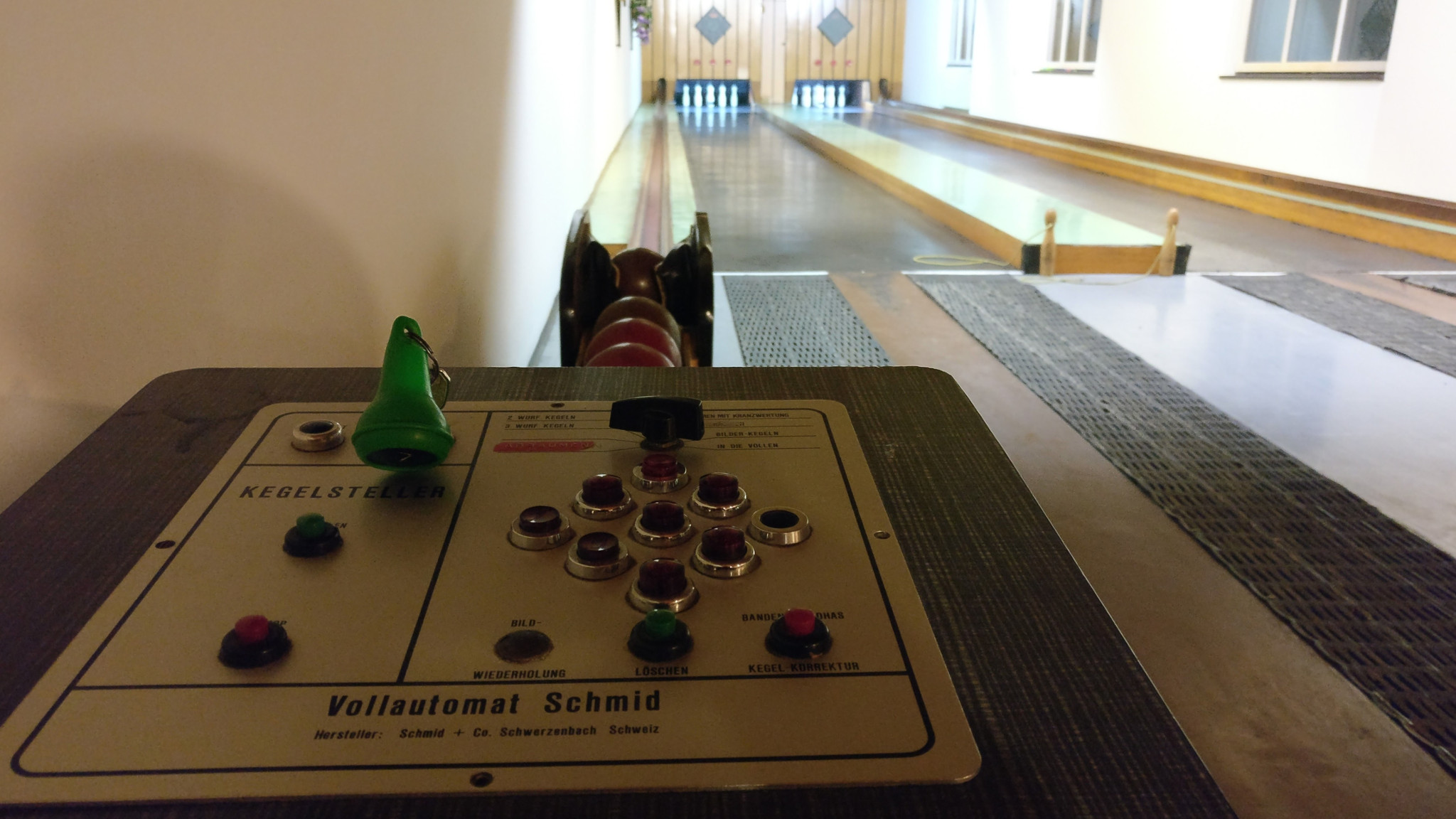 Our visit on the fifth and last day is not strictly part of the Romantikstraße route, but it’ll be part of my review anyway.

Stay tuned for the last episode!