This is the third part of my chronicle about our trip through the Romantikstraße, you can read the rest here:

After two days visiting splendid places with invaluable surprises, we finally decided to discard a short visit to Salzburg in order to spend more time on each stage of our trip. We wanted to take advantage of our rental car and Salzbug deserves to be visited more calmly (and you don’t need a car to go there). For similar reasons, we also ruled out going to the Hohenwerfen Castle.

I think it was the right decision, because it allowed us to make the most of the remaining of our road trip.

Sankt Wolfgang im Salzkammergut is one of the most touristic places of Austria. I suspect that I’d have preferred to visit this town 15-20 years ago, now it’s excessively exploited touristically. In the narrow streets of the center I had the feeling of being inside a theme park, and unfortunately one with many more shops than attractions. It is possible that the shops and restaurants themselves are nowadays the attractions. Not for me. 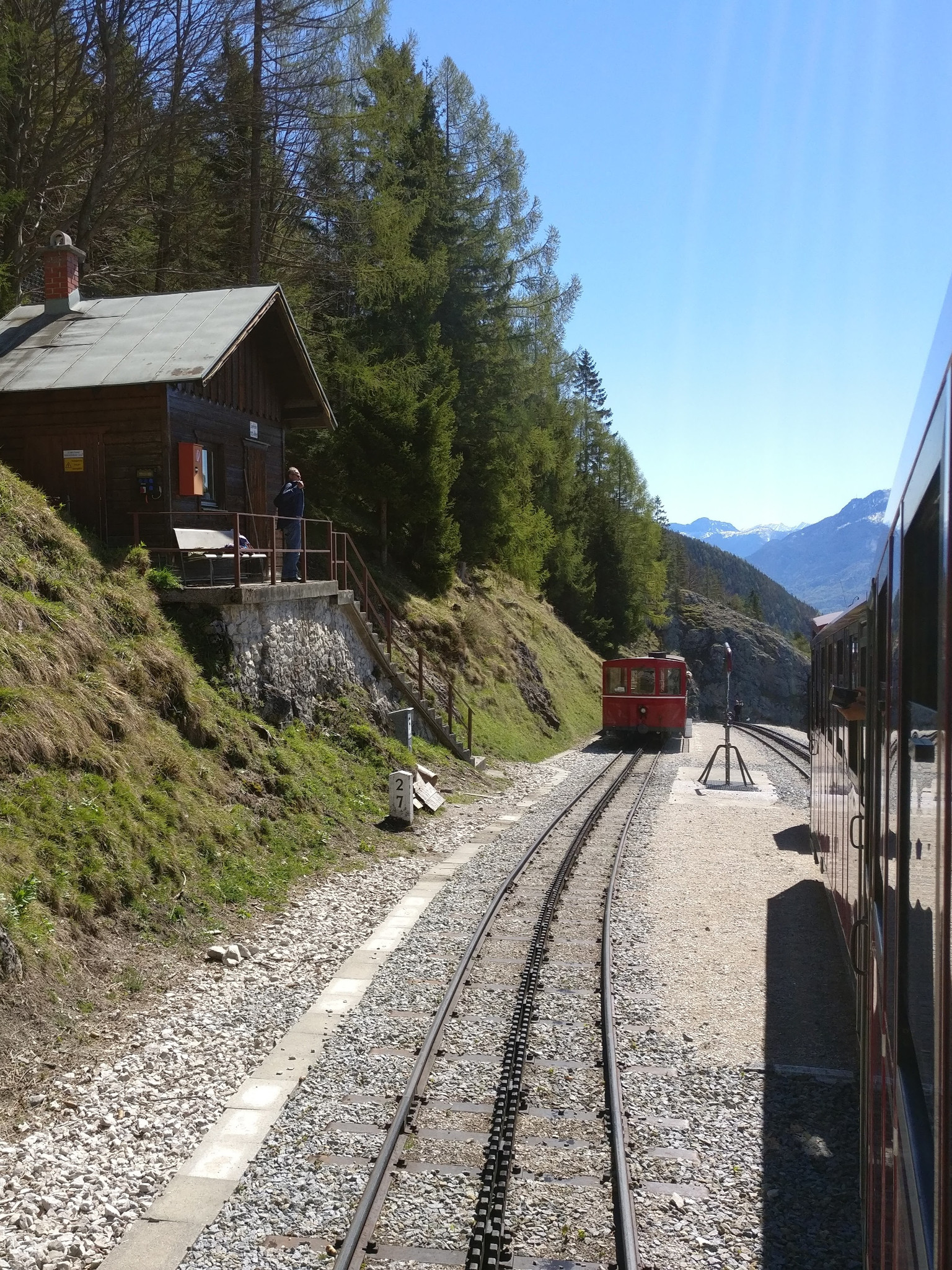 But still we had a great time there.

We started the day by climbing on the Schafbergbahn, a rack railway leading in the warmer half of the year from almost the lakeshore of the Wolfgangsee lake to the summit of the Schafberg mountain (1,783 m). From the viewpoints of Schafberg it is possible to see 9 of the main lakes of Austria, countless mountains and an infinite 360º landscape.

Initially it reminded me to a small version of the Jungfraubahn, which I visited in 2013. Saving the differences because the Jungfraujoch station is the highest station in Europe (3,454 m), the line is more than twice as long and the amount of visitors is probably exponentially greater in the Jungfrau.

Unfortunately, due to some construction works in the railway, the train only reached the Schafbergalpe (1,363 m), an intermediate railway halt with a big guest house, a couple of private houses and traces of many hiking trails.

Despite not being on the mountaintop, the views were overwhelming. We wandered around the area, taking lots of pictures but as you can imagine they don’t capture the feeling of being up there surrounded by such a wonderful environment. For my next visit I promise to bring adequate equipment to do some hiking route. 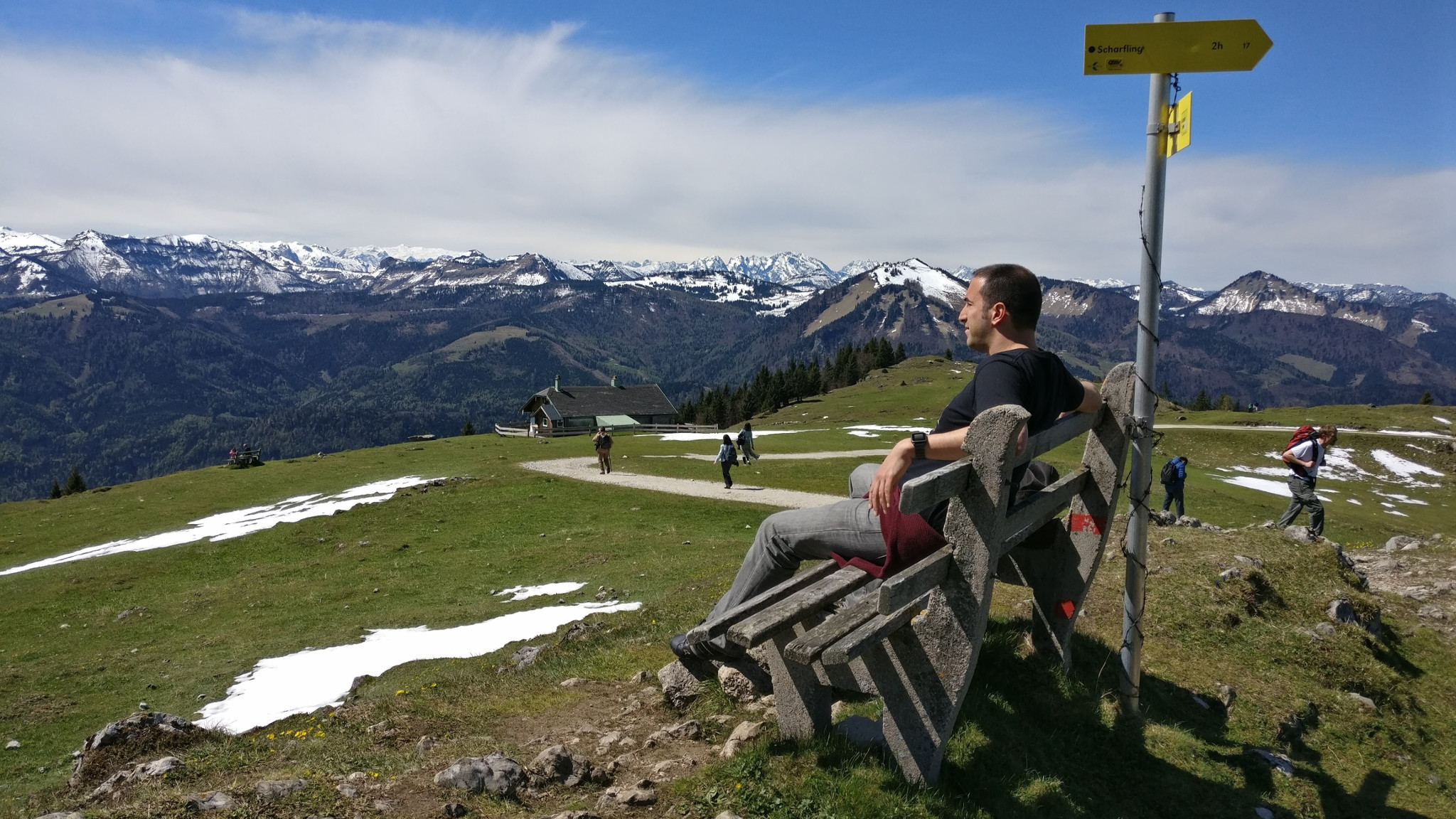 Staring into the endless mountains at Schafbergalpe

After the descent came one of the funniest moments of the trip. As we saw in many other places, on the lakeshore of Sankt Wolfgang there were some boat-rental locations. Instead of renting a paddle boat, we chose an small boat with electric engine to try to make a longer trip through the Wolfgangsee lake. In the end, our boat wasn’t much faster than a paddle boat but at least could entertain ourselves doing the clown on board instead of pedaling.

Note to my wise readers: What translation to English do you suggest for “hacer el pertur”? 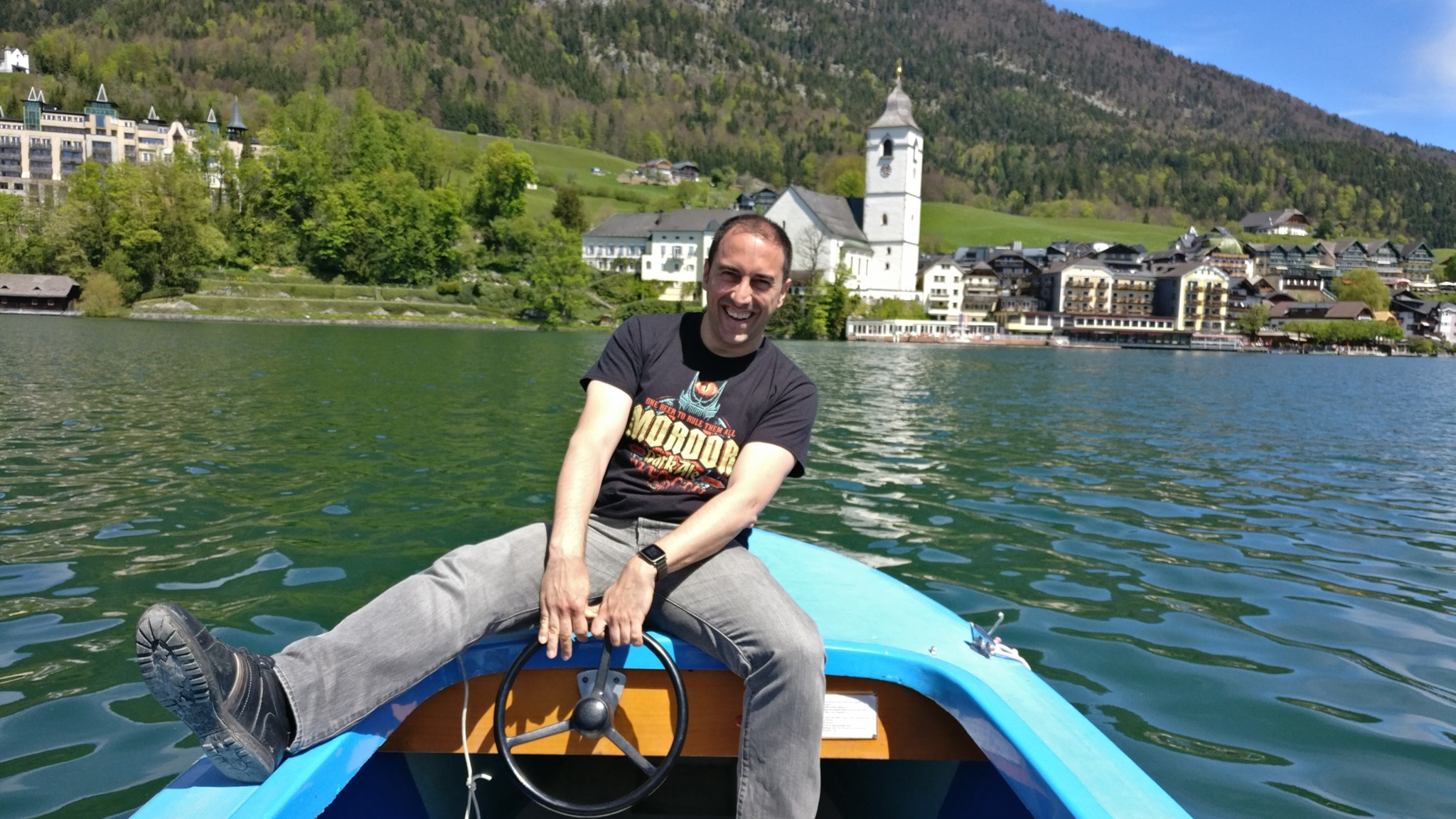 Sailing on the Wolfgangsee

Apart from amusing ourselves stupidly, from the boat we could contemplate the town from its best perspective. In the next picture you can perfectly see what I mean, a postcard view with the main landmarks: the catholic Church of Sainkt Wolfgang and the Im Weißen Rößl (The White Horse Inn). The inn (now an expensive hotel with a couple of fine restaurants) is very popular for a successful operetta of the same name in which the protagonist is a bartender of the inn desperately in love with the owner of The White Horse. The show has been performed several times mainly across Germany and Austria, but in the 1930s it was even featured on Broadway and the West End of London. There are also several movie and TV series adaptations. 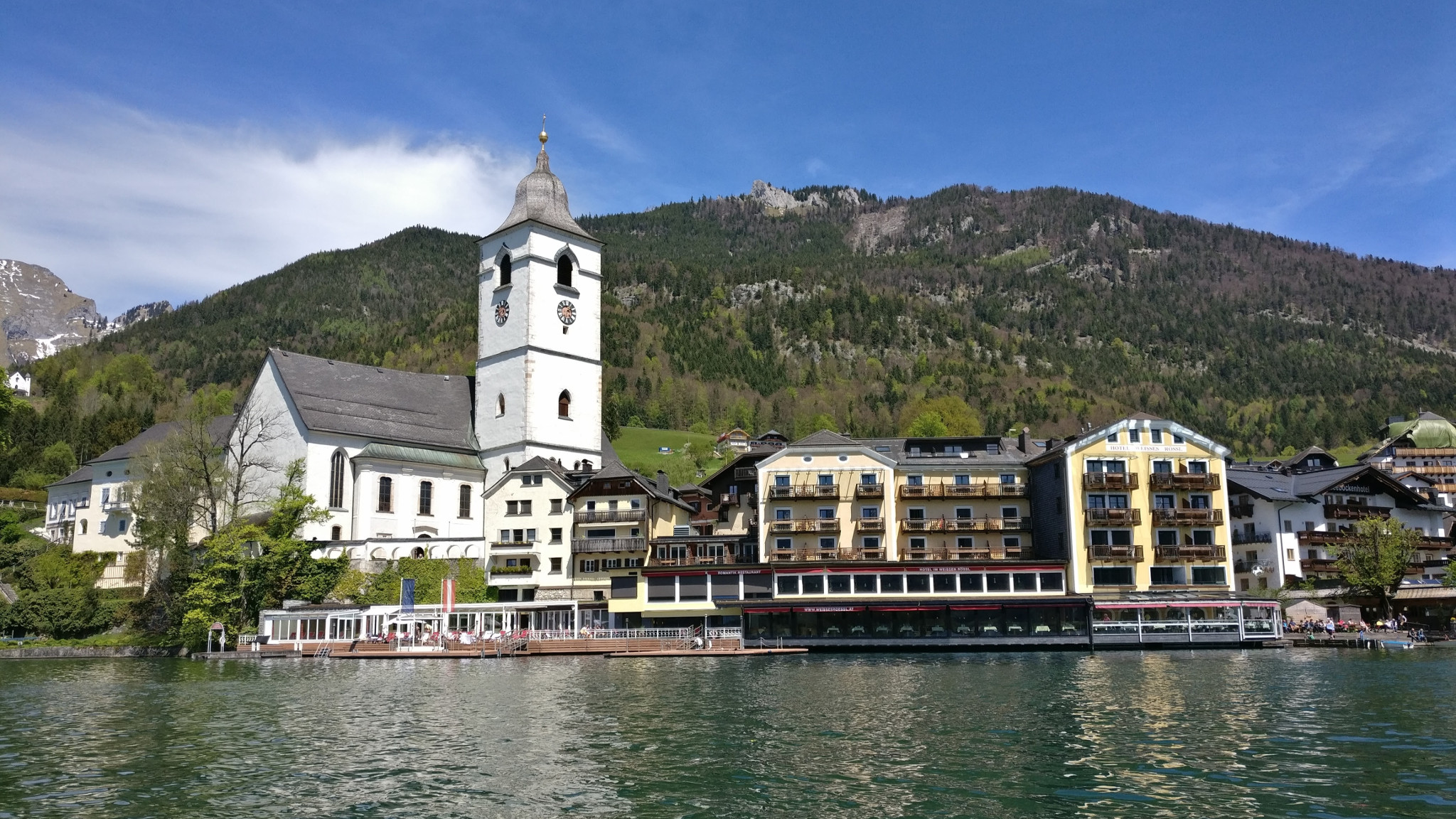 We tried to escape from the tourist traps as much as we could, but in Sainkt Wolfgang it was a really difficult task to achieve. Finally we had lunch in Hubertuskeller. It was very good and not absurdly expensive.

For the afternoon we improvised a visit to Bad Ischl and it was our main mistake of the trip, but it was our fault and not because the city is not interesting.

The center of Bad Ischl is very beautiful and it’s very well maintained, but the main attraction is the Kaiservilla, summer residence of the Austrian Imperial family, and we couldn’t see it because it was closed. The town is also famous for it’s salt mines and offers several health spas, but we didn’t have time to enjoy them. We walked through the center, we searched for a couple of caches and we left to reach Mondsee before sunset. 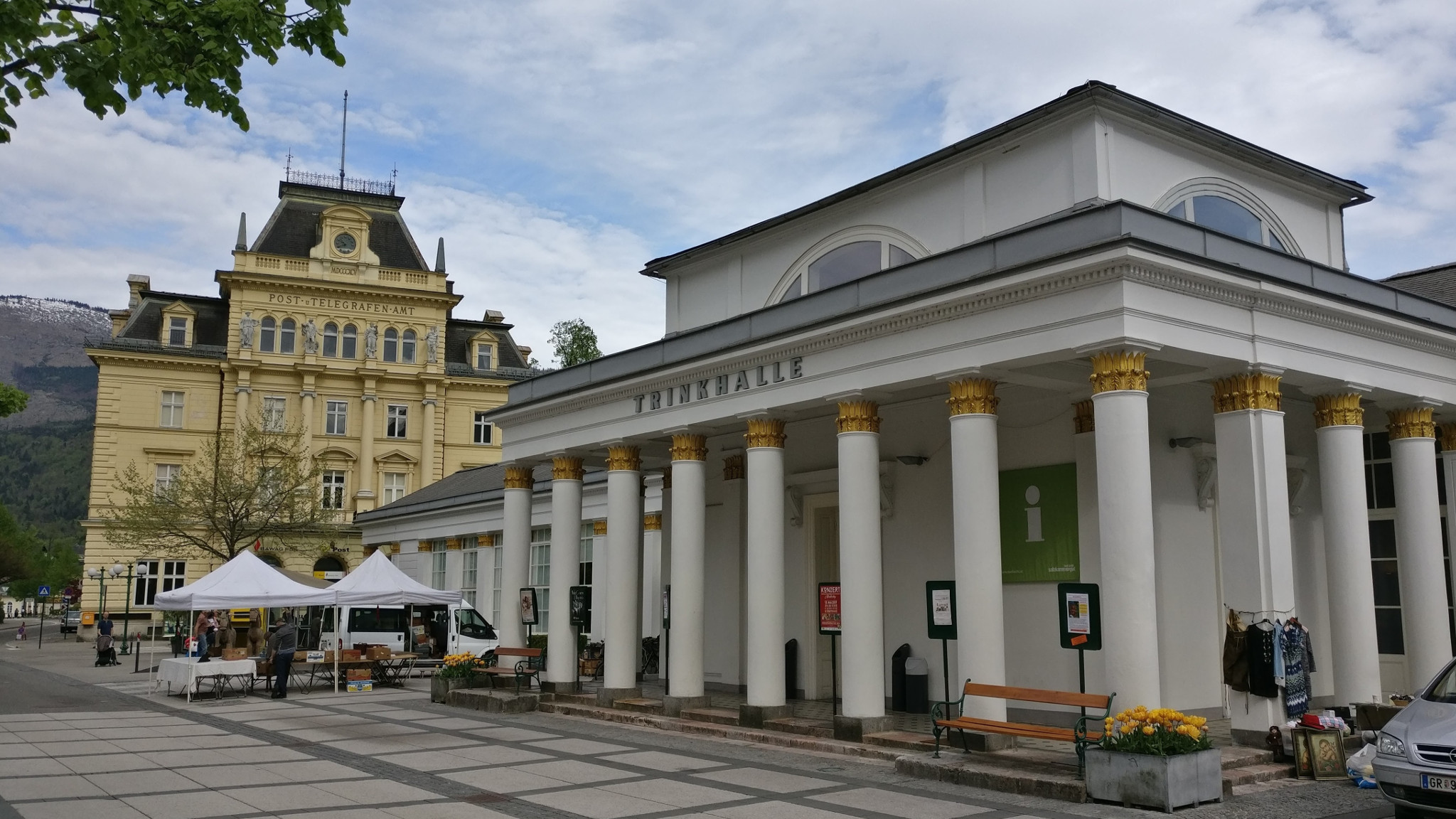 Mondsee is famous for the Mondsee Abbey and the Basilica of Saint Michael, inside which it was filmed the wedding scene of the film The Sound of Music. We did not arrive in time to visit the church but at least we managed to quietly stroll around the village.

Following a recommendation we tasted a local variety of wine and an assortment of local cheeses, and they were good but nothing special. We enjoyed particularly the Strandpromenade, from which we could see the sunset falling on the Mondsee lake. I’ve just discovered in Wikipedia that Mondsee is one of Austria’s last privately owned lakes. In August 2008, the owner announced it was up for sale. WTF! Fucking Private Property!!

Except for some detail, Mondsee is similar to other towns we had already visited in our trip, but surely it is worth spending more time here. 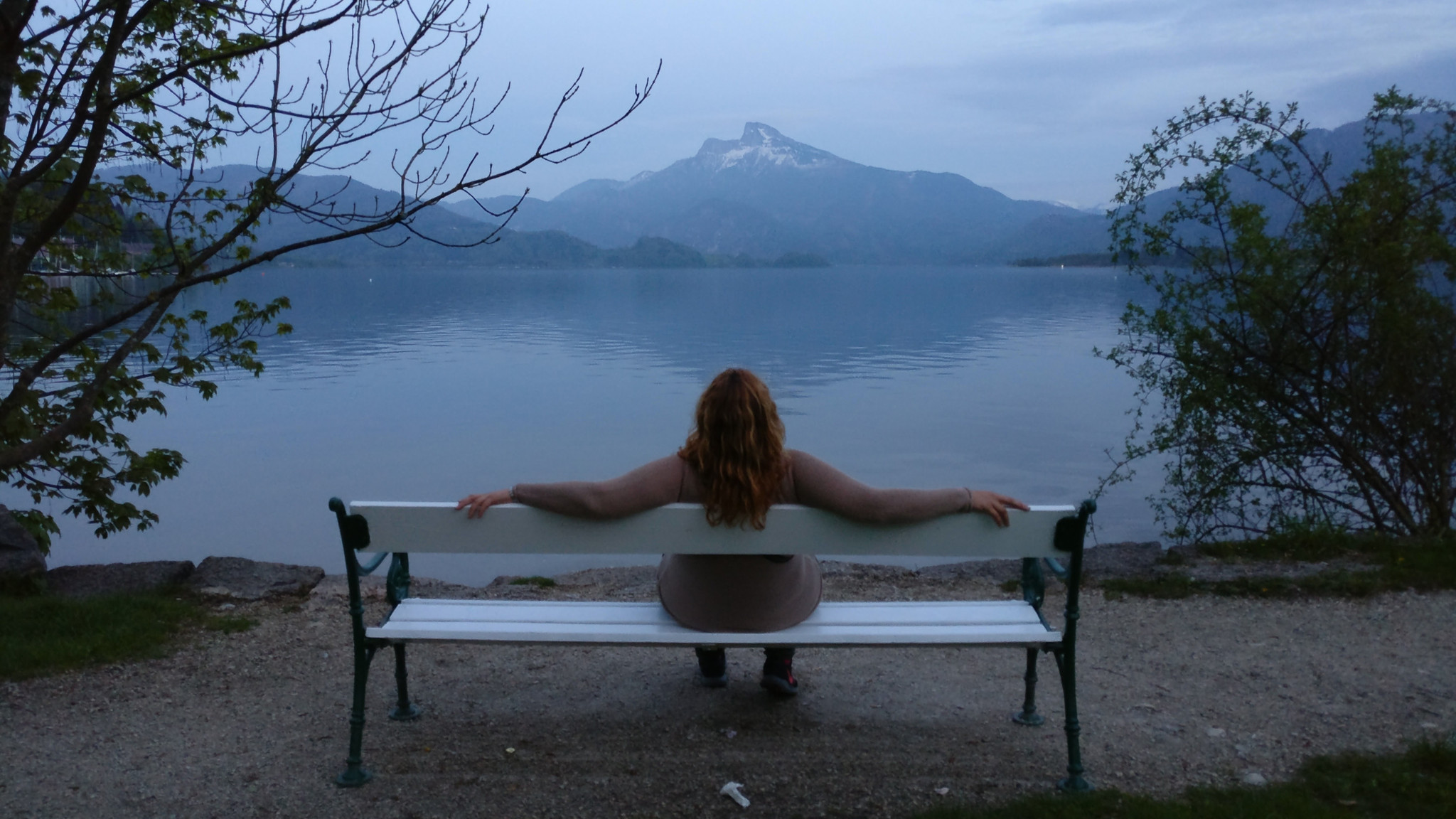 Waiting for the sunset at the Mondsee lakeshore

We were not able to find a reasonably priced accommodation here so we booked something about 20 km away and off our route, and surprisingly there we met the most incredible host in the world. But this story belongs to our next day…

Stay tuned for next episodes!