Due to the pandemic this year I could not make my yearly pilgrimage to Brussels, but I was still able to attend FOSDEM as it mutated to an online conference for the first time. It has not been the same, but it is still an experience I cannot miss.

For those of you who don’t know FOSDEM, I will keep my usual description. It is the biggest conference in Europe (and one of the biggest around the world) related to Open Source development and communities. It’s a huge event with hundreds of talks, workshops, gatherings and stands from all the relevant projects and communities in the FOSS (Free and Open Source Software) ecosystem. It’s also a marvelous place to do networking, because there are not only representatives of those projects but normally also the technical leaders of them. If you are good with names and faces you can meet and greet a lot of important and interesting people.

Being online, this year the interaction was limited to Matrix and IRC Freenode channels in parallel to the live streaming, and Jitsi for the streaming. Everything is open source, and scaled amazingly.

As @fosdem regulars we are really excited our software is used to facilitate this year's uncoventional edition. Kudos to all organizers! 🚀

I already wrote about it in previous years:

The numbers of this 2021 edition are slightly lower than in 2020 in terms of content, but it’s amazing they could almost maintain the volume of activities and this time reaching to a worldwide audience:

To make it more impressive, take into account that FOSDEM is organized by volunteers, everything is community driven and it’s free to attend. You don’t even need to register beforehand.

As usual, let me summarize some of the talks that I attended (in chronological order):

Getting the Most from Modern Java, by Simon Ritter (@speakjava)

Overall a good overview by Simon, as usual. I lost the count of his talks that I have attended.

10 Ways Everyone Can Support the Java Community, by Stephen Chin (@steveonjava)

Another popular speaker to explain different ways to support Java, not only with coding. Some of the ideas were:

The Death of Openness and Freedom?, by Matt Yonkovit (@MYonkovit)

Matt reflects on how the huge success of Open Source also brought imitators, as in another sectors like sci-fi movies. But success in Open Source has different implications, depending on the project. Matt also comments in the recent problems that we have seen in different communities, from more or less embarrassing licensing changes to projects moved to “as a service” exclusive business models.

The talk is a good overview of the different models, advantages and disadvantages of them. A thought provoking talk with lots of interesting insights.

The Democratization of Databases, by Bruce Momjian

Bruce started with an overview of what democracy or representative democracy means, and the specific advantages of other systems like an autocracy might have in sectors like the military or the space exploration. Software is usually better under democracy as it allows rapid adjustment of goals and expands the pool of talent.

According to the speaker, Democracy in open source works a bit differently. It is a mix of democracy and meritocracy, where voting can be problematic but bad decisions can quickly be reverted. The main drawback is that the plan or road map is not reliable.

Finally, the talk focuses on the PostgreSQL community, and how they operate and evolve.

Nice summary of all the important milestones of Mozilla by KaiRo. Lots of nice memories:

Database Performance at GitLab.com by Nikolay Samokhvalov and Jose Finotto

Interesting overview about how Gitlab copes with their massive amounts of users and their strict SLAs, focusing specially in the PostgreSQL database side. I got several interesting inputs from the talk, from automated database health checks (and how they do them), to best practices for the engineers (how they learn and get insights of their usage), how they experiment using thin clones, etc.

25 years of MySQL - A Retrospective, by Dave Stokes (@stoker)

Dave Stoker, community manager at MySQL, gave an historical overview of MySQL since its beginning.

It was a nice presentation, with the sense of humor you expect in this nostalgic exercises.

I have attended several talks by Ilya, some of them online and others here in FOSDEM. He always deliver insightful content, this time focused on how to provide navigation capabilities without relying on a map or a web. Ilya explained that he moved a few years ago to a neighborhood with little data mapped in OpenStreetMap. Instead of mapping all the different venues/places surrounding him individually, he tried another approach. He built his own Telegram bot, first to search for venues and then to add new places.

The main missing part is that the data surveyed using the tool is not being loaded or synchronized with OSM. Hopefully he will include it in the bot roadmap soon.

Ray and Sofia analyzed the problems that we usually see in open source documentation: lack of consistency mainly. They also explained how a few years ago a cross community group was created with the goal to provide a common way for documentation handling in the LF Networking project.

This topic is very delicate, and this is part of the problem. As Brendan explained in the presentation, mental health should not be a taboo. The speaker also added the disclaimer that this is not a specific issue of Free Software, but he focused the talk on this based on his experience.

Free Software usually implies a strong interaction with a community. This sometimes implies staying up late to close an argument or to finish up a pull request, putting a lot of pressure on this. The speaker argues that it can be worse in FOSS compared to other sectors because the emotional aspect is much more important, and everything is happening in public places. On addition to this, joining a big FOSS project also implies a bigger public space and an additional difficulty to take the initiative.

He closed the session with different ways to mitigate the problem depending on your role in a certain moment: maintainer, contributor, employer/manager, etc. The overall recommendation is to try self-care activities, to be generous with your personal time, to be gentle with yourself and to reach a therapist if needed.

Open Source is More Than Just a License, by Don Goodman-Wilson (@DEGoodmanWilson)

The speaker reflects on the differences between the colloquial and institutional descriptions of Open Source, after a few projects have claimed they are open source although they are not. This is partially caused on the emphasized importance of the license over other factors.

I don't accept the OSD as the final definition of "open source": It only captures a very narrow view of what #opensource truly is, and ignores the importance of community to open source's success.

Learn why you shouldn't accept it either:https://t.co/wtHrGNGOvP#ethicalsource

According to the speaker, focusing Open Source in just licenses is only necessary when you only want to to mitigate risk management or to reduce costs. Open source should be more about collaboration, openness to participation, pursuing goals that are community-driven, etc. Choosing one license or another should be just a mean to an end, not the end itself.

The speaker proposes using a Ethical Source Definition for software, that summarizes in:

In summary: licenses are important and useful, but put your community first

Penpot was presented in FOSDEM last year (as UXBOX, its previous name), and one year later Pablo is back in FOSDEM to announce the alpha version. As he did last year, he starts the presentation explaining why they came up with this, and how they discovered they could not find a suitable open and free tool so they managed to create an outstanding one.

Then, he directly started a commented demo using Penpot to re-design the FOSDEM website. It was amazing to see the current maturity of the tool. He completed the demo explaining some integrations they are working on between Penpot and Taiga, taking advantage of the fact that they are the creators and core developers of both tools. 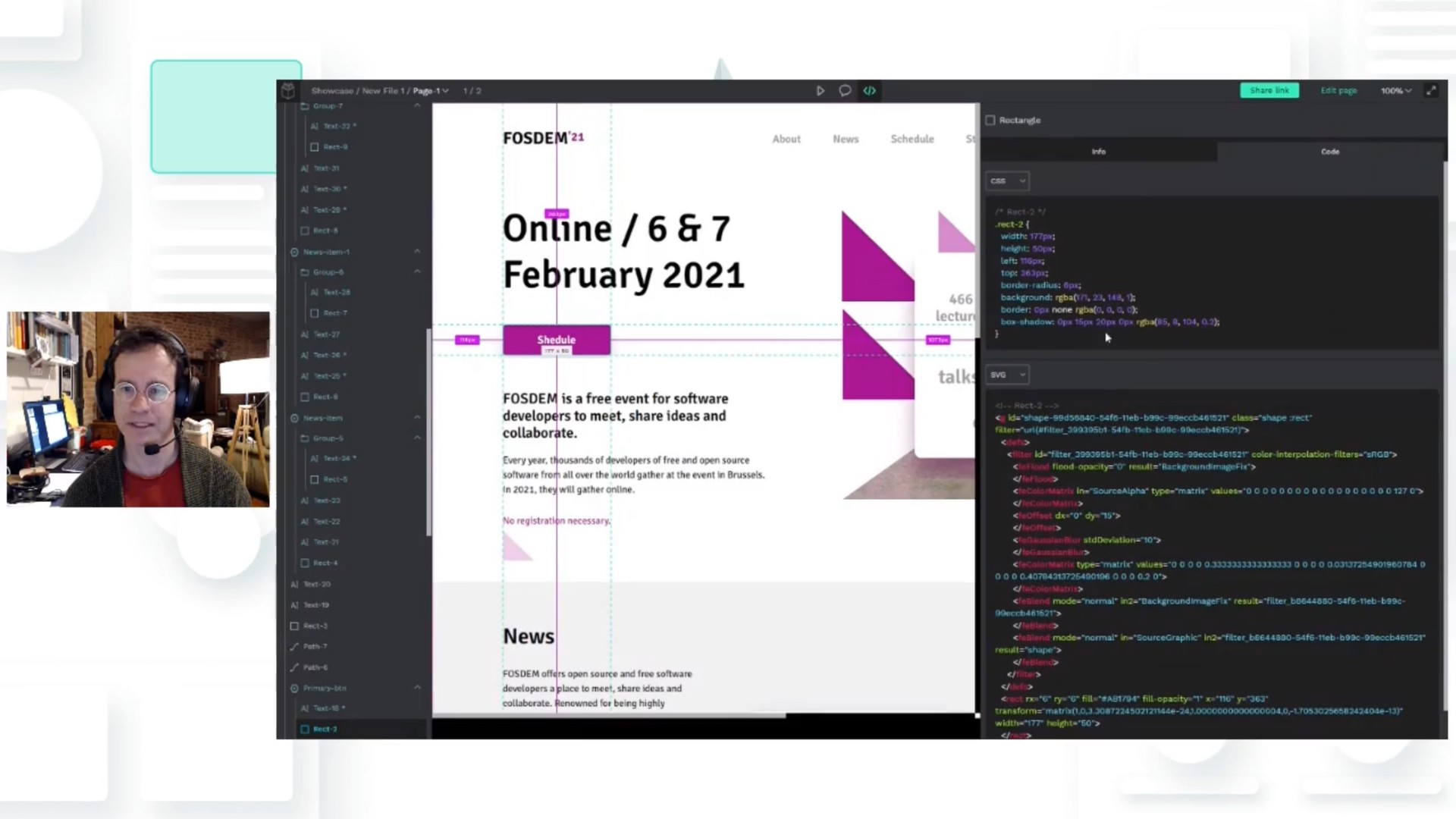